The land was thick with blackberries, wild rose, and weeds of all sorts.  It was an impenetrable dry jungly mass of thorns, some eight meters tall, thick and strong, strangling the remnants of pear and apple orchards.  The landscaped screamed of stop doing what you had been doing to me!!!!!  Chemicals, ploughing, open soils, extract, extract, dehydrate…. All leading of these modern farming strategies had led to less and less organic material and the subsequent resilient conditions for growth. The only way to keep this unsustainable system going with more and more chemicals and costs which is why we imagine the land was abandoned.

So we turned the tides, cleared the land initially using a mulcher to help clear but give heaps of organic material back and lessen the huge risk of fire that comes with all of those drying vines and grasses.  A diversity of cover crop was sown when the rain hit and voila the first steps were taken back in 2010 to recreate abundance. As the intention for biodiversity and regeneration occurred, creatures of all sorts appeared as the land became alive once more.

Since then regenerative earthworks and soil stabilizing measures have been designed and implemented with the ever present stimulation of the soil food web. Basically we had

to make sure organic matter wasn’t going to wash away if we were building it.  However, our sandy soils are inherently leaching and the combining sea spray seem to be limiting factors to fertility.  We believe building rich soils in this extreme climate of a prolonged dry season and a very intense rainy season is a five year process.  We are getting there but with a big gardens and numerous phases of implementation, we are learning patience.  This means as we build soil with varying techniques and begin crop cultivation in one section, we are at our beginning phases in another.  The following is a list of the techniques we are using: 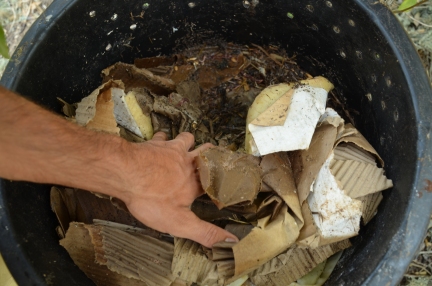 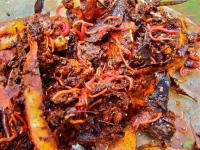 full on decomposition from the worms in the worm bin

This multi-element approach is a central focus of ours and we try to communicate and demonstrate this during our courses, long or short.  Building a massive compost pile is a big project of each years PDC and we are so grateful for all the helping hands accumulating all of that matter, soaking it, organizing it in layers, monitoring it, and turning it!  We layer green and brown material mostly from the site and other material cast away as garbage at the side of the road.  We incorporate food scraps but make sure we do it in thin layers. We chop the material as fine as possible and wait for the magical heat to build.  The pile is monitored intently for temperature and we use our noses as well to see if we should turn it.  After three or four turns and about a month the hot composting process begins to wind down.  We let the worms do the rest once the pile cools down. We also do a massive sheet mulch most years to put all those eager hands to work and create soil!!!!!

Extensive sheet mulching project in the early stages in 2011, which has been a huge boast to the lands fertility.

We hope to bring animals more into the scene and help build the natural capitol that comes from the Use of Biological Resources.  We also hope to incorporate more the use of biochar as sandy soils seem to respond well to this treatment.  Also the use of radionics 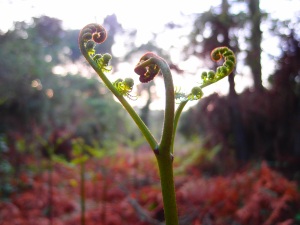 and unlocking some of the nitrogen through a pedulum is a great energetic attempt at interaction with nature.  We are willing to try everything and deepen our layered approach to slow the drying winds and intense sun that defines the mediterranean.  This brings photosynthesis and its carbon rich root exudates to a trickle in the summer months, so we must restore through seeing abundance and working with nature, not against. And when we do, the cycle is completed and a yield creatively extracted. Our gardens have produced lots of bounty so far and we look forward to deepening our soils and our connection with this magical little valley that is ripe for food production and transformation.  Agriculture itself means to build soil but we recognize the wisdom left behind by Masanobu Fukouka and his masterful quote,

“When it is understood that one loses joy and happiness in the attempt to possess them, the essence of natural farming will be realized. The ultimate goal of farming is not the growing of crops, but the cultivation and perfection of human beings.” ― Masanobu Fukuoka, The One-Straw Revolution

The fruits of our labor of building soil, watering and tending to plants