If you have some time to explore the area around Sintra, you will discover what a magical place it is. Just 30 minutes walk from Terra Alta, the Atlantic Ocean washes up on dramatic cliffs and beautiful beaches, like Praia da Ursa (below). Praia da Adraga, just 20 minutes north of there also has a cafe and restaurant with free wifi internet. On foot you can explore the rolling green hills of this national park and UNESCO World Heritage region looking out towards the blue sea, with stunning views all around… 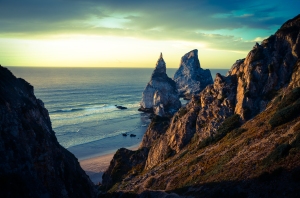 A little way inland towards the hilltop town of Sintra, you have many more attractions to discover, perhaps the best of which is the extensive mythical and magical forest, full of hidden sacred places, rocky boulders, old trees and mosses and mushrooms and at night – masses of flickering fire flies and gently illuminating glow worms. 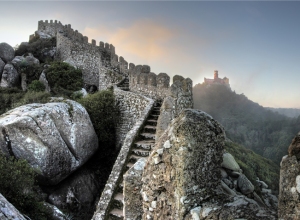 Dating from some of the region’s earliest documented history (around 8th – 9th Century) is the Moorish Castle, or Castelo dos Mouros, which can be seen from around the region perched on one of the highest hilltops. At the base of the castle there are many exciting rocky outcrops and it can be great place to hike to and climb around!

One of the most lovely sites in the area, this small and humble convent was a monastery inhabited by just 8 monks, dating from 1560 when it was constructed under the orders of the King’s Counsellor of State, D. Álvaro de Castro. His father, the fourth Viceroy of India, had apparently been hunting a deer in the mountains of Sintra and fell asleep by a rock after losing his prey. He dreamed of building a Christian monument there, and so the convent was inspired by this vision, officially named Convento de Santa Cruz da Serra da Sintra (Convent of the Holy Cross of the Mountains of Sintra). The order of monks who inhabited the convent until all religious orders were abolished in 1834, lived by the principle of poverty and simplicity. The building itself was designed according to this principle, minimalistic and in harmony with its surroundings, of moss covered boulders and misty forests. It was also designed with features representing the number 8, or infinity making it a very spiritual and peaceful place. One of the most famous monks to have lived there, Honorius, apparently lived in solitude in a grotto by the convent for 30 years, until the age of 100!

The grand national monument and world heritage site of the Palácio Nacional da Pena is a well known work of romanticist architecture, and a characteristic feature of the Sintra landscape, as it sits high up like the Castelo dos Mouros on another of the highest hilltops among the Sintra Mountains. However, for centuries it was a quiet and humble site of pilgrimage and meditation, before much of what is there was built in the 19th Century. Originally there was only a chapel, dating from the middle ages, and then a monastery also. The palace was constructed some time after an earthquake reduced the monastery to ruins. The design was commissioned by King Ferdinand to a german architect and engineer named Baron Wilhelm Ludwig von Eschwege, although the King apparently introduced features in of  islamic and medieval style as well. It was completed in 1847. The palace was also surrounded by 200 hectares of parkland, in which many exotic species of plant and tree were introduced by the King. 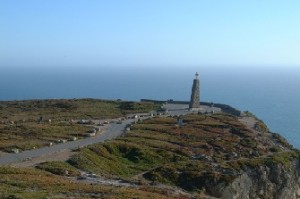 Cabo da Roca, the western most point of Portugal and the Eurasian continent, can be reached on foot along the coast, perhaps 40 minutes south from Terra Alta. There is a lighthouse, and a monument, where the cliffs reach 100 meters, overlooking the Atlantic Ocean!

Discovering the area on foot is the best way to take in some of the lovely scenery, and there are also lots of small villages around with cafes and some markets where you can try a huge range of local grown and made produce – pastelaria – pastries and cakes, as well as cheese, fruit, olives, wines and other specialities.

As a region also rich in biodiversity, you can see a large range of fruits, plants, flowers and trees in Sintra, the beautiful patterns of which have often been incorporated into architectural features and painted tiles which are special in Portugal; it’s a magical environment for budding permaculturalists to find inspiration!